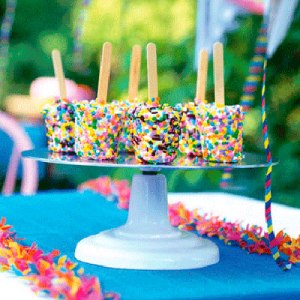 Beneath the confetti-candy covering of these ice cream pops lies a marvelous surprise: Oreos, M&M’s and Reese’s Peanut Butter Cups. All swirled together with creamy vanilla ice cream on a Popsicle stick. This recipe is great for all those “mini chefs” to get cooking in the kitchen. Not to mention its a great way for them to get in on all the fun. Perch the pops on a chilled cake stand to give them a longer life during serving.

3. Freeze until the ice cream has solidified.

4. Pour confetti or sprinkles into a shallow bowl and set aside. Peel the cup from each ice cream pop and roll the pops in the decorations to cover completely.

5. Serve Immediately or store in the freezer for up to 3 days.

*CHEF’S NOTE: BYOC (Be Your Own Chef) Mix and match your favorite candy and/or cookie combinations. Not in the mood for candy or cookies? Try fruit. The possibilities are endless.

Who doesn’t love a Reesa cup as I call them. LOL. I mean when Chocolate & Peanut Butter are joined together in the mist; What a combination. And this dessert is no exception. Just picture a Oreo cookie crust, smooth peanut butter filling, fresh whipped topping and loads of  chopped Reese’s cups on top. Oh Baby!

Now it is time to make the topping for garnish. In a separate COLD bowl whip heavy cream until almost stiff. Add sugar and vanilla; beat until cream holds peaks. (Again DO NOT over whip because it will turn into butter). Decorate pie with whipped cream and roughly chopped peanut butter cups. Mmmmmm…..

*Chef’s Note – If you want a more lower fat recipe just substitute the sugar with splenda, and the cream cheese with reduced fat cream cheese. 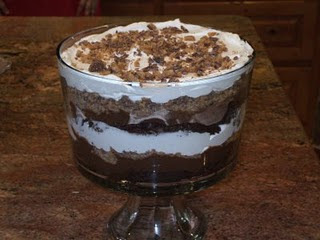 Today I decided to re-visit a Porter House Original, Death By Chocolate Trifle. This recipe came about during a time when we were in transition of moving and had to live in a hotel. We had no kitchen, very little monies and a serious hankering for something sweet.  Within a blink of an eye the thought process began. What can I fix that didn’t require a kitchen? That didn’t cost a lot? And would fill the void?  Then the vision appeared and Death by Chocolate Trifle was born into existence. Now the traditional trifle consist of some sort of chocolate cake or brownies but with no kitchen that was out of the question and then I had an Aah Ha! moment. The light bulb went off.  How about Oreos? And there you have it my friends something simple, cost efficient but yet Sooo Good! I just love when a plan comes together.

Prepare pudding according to package directions with the above listed amount of cold milk; set aside.  Crush Oreos into pieces and place about half on the bottom of a clear glass bowl, in a single layer.  Evenly pour half of the pudding on top of the crushed cookies.  Layer half of the whipped cream, then half of the toffee bits.  Repeat layers one more time.  Chill for 4 hours before serving.

*CHEF’S NOTE –  For a perfect ending to a romantic dinner make this dessert in wine glasses topped with a strawberry and fresh mint.